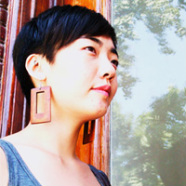 Today, we had a guest speaker: Peggy Lee.  She is an Organizing Fellows blogger for Open City: Blogging Urban Change (http://openthecity.org/).  The theme of her workshop was to teach the students about Spoken Word;  as another outlet in which they can express themselves and tell the immigration stories they will be gathering.  We did a brief introduction, then Peggy explained what Spoken Word was.  Then, the group listened to a spoken word piece by Marlon titled "I Was Born with Two Tongues" (http://www.youtube.com/watch?v=NtjnqjyNlv0) and another performed by Peggy herself named "Communication of Water" which you can read below.  The students were asked what they thought about the two and what they felt.  Some feelings were: anger, sadness and disappointment.

The second part of the workshop was a writing section using 2 prompts: 1. Reflect on an experience when you or someone you know was discriminated, humiliated or felt anger, sadness, excluded because of your/his/her identity.  What happened and how did you feel?  If you could rewind time, what would you do or say?  2. What does being an immigrant or from immigrant parents in America mean to you?  What pride do you feel?  Again, start with a memory.

After each of the students told us their story, Peggy gave suggestions of ways they can choose a specific detail in their story and explore it more.

Thank You Peggy for taking the time out of your busy schedule to visit us and leading this workshop!

When I heard that,
You were laughed at.
When I heard that,
You were not treated
With the dignity and respect
That any upper-class looking white woman
Can get with the lift of the finger,
“Check!”
Can get with the wave of the hand,
“Taxi!”
But, you were treated
Like a clown
A one woman show with her
Foreign tongue that skips like small pebbles over water
Sending circle ripples that cannot reach everyone.
You thought that maybe they just didn’t understand
So your voice rose, naturally but
It was only amplifying the humor to their ears
Your words were not taken at face value
But they were counterfeit
Like the Gucci’s, Prada’s, and Louis Vutton’s
Down at the Chinatown market
But what could you do
When they strolled out from their patrol cars,
Grins trespassing their law enforcing white faces
You knew right then it would be another battle
And justice will not be served to you, on a platter.


You.
You, a 5 foot 1 soldier made nothing but
The toughest bark
The most solid stone
The fluidity of clear water
And you flow through me
Your native tongue
Releasing characters that look like the circles
And lines of butterflies
Carrying the strength of dragonflies
Despite the shit you had to deal with
Coming to America
The immigrant story
Many stories
Marked with
The worries of money
Marked with the fears that your children will stray and become lost
From Seoul, from you
Marked with the tears of your isolation
Suffering does not escape from your mouth
In those phone conversations
To your mother and your father
The sacrifice you made
From teaching and chalkboards
To washing and dry cleaning
Your hands aged 10 years for 1
That $6.75 got you nowhere


But it got us somewhere


And now we are all okay
Because, I look at you
And you are


You see my face
Already feeling my skin from underneath
It is a red mix of human flesh
Hot, hate, love, guilt, shame
Why shame?
Because I can see what they saw
That one woman show
With her foreign tongue
I felt guilt, because I wanted to stand there
Your lawyer
On your defense
Proof, that you are not as foreign as they think
I want them to know that they are wrong
But I am wrong,
You were here longer than I
So despite your tongue
And it’s tendency to skip like small pebbles on water
I am more foreign than you.
Biography: Peggy Lee resides in Sunset Park, Brooklyn where the neighbor’s cursed rooster crows at 5:30 in the morning, a neighborhood cat ritually pisses at her window, and she has had many Tecate-driven conversations interrogating “life” on her roof top over-looking the Upper New York Bay and Lady Liberty. It is home. Her sensitivities to location, space, place, threaded by sonic experience are owed to her erratic moving history. Peggy admits being touched deeply by the lagging grunge scene she experienced in St. Louis and later, the hip hop circuits of LA & the Bay Area. She loves how questions about her childhood begin with “military brat or foster care?” Neither. She graduated with her M.A. in Performance Studies from New York University and a B.A. in Feminist Studies at University of California, Santa Barbara. She is a poet, performer, youth worker, and hustling, bright-eyed, bushy-tailed writer in New York City.

Peggy is part of Oh! Industry, a “no-brow” online magazine dedicated to the trends, catastrophes, and melodies of popular culture, as well as wiqaable.com, an online source and voice for what is queer and Asian.
Homework Assignment: Using what you wrote in class and Peggy's suggestions, write a creative piece, whether it's a poem, spoken word performance or narrative about the topic and story.  Use Peggy's suggestions such as going more in-depth with specific details from your stories and talk about how you felt about the experience.