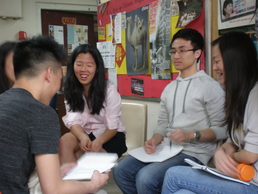 Who's Your Neighbor? In a circle, “IT” runs up and quickly asks “Who’s Your Neighbor”. Person must name their neighbors in <5 seconds, or else he/she is “IT”. If they get the names right, “IT” can ask “How are you feeling?” and person responds “All Right / All Wrong / All Mixed Up”. Upon response, whole group shifts one chair in that direction and “IT” tries to grab a seat. *Challenge: Ask “Who’s his/her neighbor?” instead. *SAFETY* should be considered since this involves physical activity.
Groups for today's activity:

The following are historic events we felt was important for the students to know that may have affected their own family history:

Global/International (By: Linda and Nick):
Pull factors: From 1849-1882, Chinese immigrants immigrated to the American west to become contract laborers. They worked mainly in railroad building, mining, construction, agriculture, manufacturing, etc. as unskilled workers. This influx frightened many Americans, who also at felt no need for Chinese cheap labor after the railroads were built.  This anti-Chinese sentiment resulted in the Chinese Exclusion Act of 1882, which very nearly halted immigrants from China.

Push factors: many of these immigrants were peasants looking to escape the economic hardship of rural China, then ravaged by drought, famine, and the Opium Wars.

Post World War II, the Immigration and Nationality act of 1952 nullified the racial restrictions on naturalization, finally allowing Asians ian America the opportunity to naturalize if they’d be in in the country for over 5 years and were of “good moral standing”. The act also placed great importance on labor qualifications, making it easier for those with higher level “skills” to immigrate.

The Act was also distinctly discriminatory towards those from communist countries, who were suspected to have communist beliefs. In 1949 –  Mao Zedong and the communist party successfully took control of the Chinese government after the civil war against Chiang Kai Shek and the nationalists. This splintered the Chinese community in America, and also led to a climate where the Chinese were forced to prove their loyalty to American democracy, a stark difference to WWII, when the Chinese were considered allies.

The Korean War beginning in 1950 also contributed to anti-Communist and therefore anti-Chinese sentiment.

By the 1960s and particularly 1965, the Civil Rights Movement in America led to the lifting of restrictions on Asian immigration from the Asian-Pacific triangle. This second wave of immigration began a new chapter in the history of Asians in America,  and was surprisingly different in demographic by this time. Post WWII and Korean-War Japan has significantly fewer emigrants to America, mainly because of a huge economic expansion effort that offered Japanese easy working opportunities at home. In twenty years, the percentage of Japanese immigrants would go from 3% to 1.7% of overall Asian immigration to the US. Meanwhile, most of the Asian immigrants to America within that time period came from China, mainly escapees of Communist China under Mao Ze Dong.

National (By Jeffrey and Yishion):
1955: Everett Drumwright, US consul in Hong Kong, makes an unsubstantiated claim in his Foreign Service report that virtually all Chinese in America — all the way back to the days of the California gold rush — were/are illegal aliens capable of all manner of criminal activity such as narcotics trafficking, counterfeiting currency, illegally collecting Social Security and veteran's benefits, issuing fake passports, and spying for China. He further reported that a network of Chinese sleepers who had infiltrated the US, were waiting on orders to sabotage and destroy America. As a result of this report, FBI Director J. Edgar Hoover subscribes to the notion that the American Chinese community is teeming with spies from China. The entire Chinese American community is placed under investigation and scrutiny. The FBI knocks on the doors of just about every Chinese household in the US, and Chinese Americans are subject to interrogations and wiretapping. Thousands are detained and many deported. Many of those remaining have their careers and/or businesses ruined in a post-McCarthy-era paranoia.

1965: "Immigration and Nationality Act of 1965" abolishes "national origins" as basis for allocating immigration quotas to various countries. Also known as the "Hart-Celler Act," this piece of legislation replaced the national origins quota system with a preference system that focused on immigrants' skills and family relationships with US citizens. It opened up immigration to Asian countries (as compared to before, when immigration was limited strictly to Europeans)

1969: Student strike at University of California, Berkeley, for establishment of ethnic studies programs. Led by the Third World Liberation Front, a joint effort of multiple student union groups, this event was the longest student strike in the nation's history (5 months)

1975: More than 130,000 refugees enter the US from Vietnam, Cambodia, and Laos as Communist governments are established there.

1982: Vincent Chin, a Chinese-American man, is clubbed to death with a baseball bat by Ronald Ebens and Michael Nitz. This hate crime occurred in Detroit, Michigan, because Ebens and Nitz thought Chin was Japanese. Chin was having his bachelor party before his wedding when Ebens and Nitz approached him because of the loss of US auto-manufacturing jobs to Japan, and they got into a fight at a bar. After leaving, Chin was chased by Ebens and Nitz, and was held and beaten. Chin fell into a coma and died four days later.

1986: Immigration Reform and Control Act imposes civil and criminal penalties on employers who knowingly hire undocumented aliens. This piece of legislation required employers to attest to their employee's immigration status. The goal of this legislation was to establish financial and other penalties to lower employment prospects for immigrants, thereby discouraging undocumented immigration.

1992: LA Riots. African American motorist Rodney King was beaten by Caucasian and Hispanic officers; incident was recorded in April. Thousands of pople rioted over the course of six days, and the National Guard and Marines were called in to control the situation. There were fires, looting, and assault, resulting in 53 deaths and approximately 2,000 injured. Korean and Asian stores were targeted, and because of the lack of police enforcement, storeowners had to band together into vigilante bands to protect their property. Racial tensions between minority groups contributed to the start of the riots as well.

NY Chinatown (By Bernice and Lauren):
1970s: Chinese community established a foothold in the neighborhood of Flushing, whose demographic constituency had been predominantly non-Hispanic white, interspersed with a small Japanese community.  The Taiwanese were the first Chinese immigrants to arrive and developed Flushing's Chinatown.  It was known as Little Taipei or Little Taiwan.  However, over the years many new Chinese immigrants from different regions of China have arrived, and now the Chinese population is very mixed, with different provincial languages and cultures.

1988: Brooklyn Chinatown in the Sunset Park area of the borough of Brooklyn in New York City, is one of the largest and fastest growing ethnic Chinese enclaves outside of Asia, as well as within New York City itself. Because this Chinatown is rapidly evolving into an enclave predominantly ofimmigrants fromFujian Province in Mainland China, it is now increasingly common to refer to it as the LittleFuzhou of the Western Hemisphere.

In the earlier part of the 20th century, 8th Avenue in Sunset Park was primarily home to Norwegian immigrants and it was known as Little Norway or Lapskaus Boulevard as theNorwegians termed.  Later on, as Norwegians left, the neighborhood increasingly became abandoned by the 1950s.

By 1988, 90% of the storefronts on Eighth Avenue in Sunset Park, in southwestern Brooklyn, were abandoned. Chinese immigrants then moved into this area - not only newarrivals from China, but also residents of the Manhattan Chinatown in New York City's Manhattan borough, seeking refuge from high rents, who fled to the cheap property costsand rents of Sunset Park and formed the Brooklyn Chinatown.

1996:  Gary Faye Locke is a Chinese American politician and the current United States Ambassador to China.   Locke was the 21st Governor of Washington, serving from 1997 to 2005. He was the first governor of a state in the Continental United States of Asian descent, and is the only Chinese American ever to serve as a governor.  He was then appointed by President Barack Obama asUnited States Secretary of Commerce which he served until August 1, 2011, when the President appointed Locke as the ambassador to the People's Republic of China.

2001: The September 11th attacks caused a decline in business for stores and restaurants in Chinatown. Ten years later, the neighborhood had not recovered from the falloff inbusiness, which continued after the lifting of travel restrictions immediately after the attack. The attacks resulted in a decline in the number of garment factories, which at its peak employed 30,000 workers. Tourism has risen since 2004, but is nowhere near its pre-attacks peak. A Chinatown Business Improvement District has been proposed, but is being resisted by some merchants.

2010: Chinatown and Little Italy were listed in a single historic district on the National Register of Historic Places.Local historic districts usually enjoy the greatest level of protection, under law, from any threats that may compromise their historic integrity. This is because many land-use decisions are made at the local level. There are more than 2,300 local historic districts in the United States. Local historic districts can be administered at the county or the municipal level; both entities are involved in land use decisions.
Homework: For the coming weeks, there will be interviewees scheduled for students to interview so please check your emails.  Also, students must interview a working youth (age 18-24 years old or college-level student). Please send notes or transcriptions to: bnny5112@gmail.com.  Be prepared to discuss in the next session.