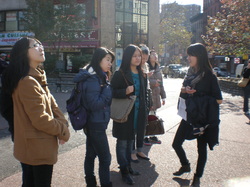 Group in Chatham Square/Kimlau Square
This week, we decided to head outside of the CPA office and take a walking tour of Manhattan's Chinatown on this beautiful day.  Led by mentor, Maggie, the following is a list of the locations we visited and the information about them.

Chinatown history:
In the early 1900’s, there was little chance for Chinese to live outside of Chinatown because of language barriers, prejudice, lack of economic/business opportunity.  Chinatown was seen as a seedy underworld, full of opium dens, gangs, dirty streets.  With the alliance of the US and China against Japan during WWII, attitudes towards Chinese liberalized.


1. East Broadway:
- Also called “Little Fuzhou”
- Starts at Chatham Square and runs eastward under Manhattan Bridge and ends at Grand Street
- Known to be in the middle of what is known as the Wall Street of Chinatown due to the significant number of financial banks owned by the Chinese concentrated on this street and surrounding streets
- 187 East Broadway (between Rutgers and Jefferson Street) - the old CPA office used to be here!
- 165 East Broadway - (corner of Rutgers/East Broadway near the F train) - site of the old Garden Cafeteria during 1941-1983, (now Wing Shoon Restaurant) a place where Jewish writers, poets, intellectuals socialized.  They say that Leon Trotsky ate there.  You can find out more information here.
- Known for having two Chinese theaters: 1. Sun Sing Theater, opened in 1911 on 75-85 East Broadway, first showing Yiddish entertainment then convert to the New Canton Theater in 1942, showing Cantonese opera, it closed in 1993; 2. Pagoda Theater on 11 East Broadway, opened in 1964, showed Chinese movies with English subtitles, closed around late 1980s to early 1990s
- Fuzhou immigrants have existed around the area of Division Street and East Broadway as early as the 70s and early 80s, including the Fujianese gang named the Fuk Ching
- The Golden Star Bar at 9 East Broadway was a place the Chinese gangs would hang out

2. Confucius Plaza:
- Civic history: statue was a gift from the Chinese Consolidated Benevolent Association in 1976
- Asian immigrants rallied to include Asian American construction workers for building housing project, eventually about 40 were hired
- First major public-funded housing project for Chinese Americans built here
- Chinese immigrants increasingly congregated in these areas during the 1940’s with families able to reunite.  The Immigrant Act of 1965 officially overturned the Chinese Exclusion Act of 1882 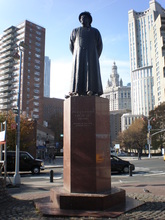 Statue of Lin Ze Xu
3. Chatham Square:
- Named after Earl of Chatham/former Prime Minister of GB, William Pitt, who led American opposition to unfair British taxation
- Until 1820 – used as large open air market for goods and livestock
-1850’s – Became the center for tattoo parlors, saloons, was the Times Square of its time and a seedy section, was the Times Square of its time
- Kim Lau Memorial Arch, in memory of Chinese Americans who died in WWII, erected 1962
- Benjamin Ralph Kimlau was born in MA in 1918, moved to NYC in 1932.  Was an Air Force pilot during WWII and flew bomber missions against Japanese airbases until crashing in 1944.
- Arch was a gift of the Lt Kimlau Chinese Memorial Post 1291, founded by Chinese American war veterans.  They still operate today, leading community initiatives on behalf of Chinatown.
- Statue of Lin Ze Xu – national hero of China, lead efforts to eradicate opium in China in 1830’s, leading to First Opium War. Famous for writing a letter to Queen Victoria with moral superiority, surprising given Britain’s military dominance
- First Shearith Israel Cemetery, oldest Jewish cemetery in NYC.  First American-born rabbi is buried here, as are 18 Jewish Revolutionary War soldiers 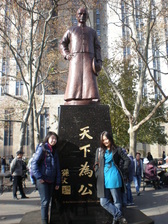 The Statue of Sun Yan-Sen
4. Columbus Park:
- Manhattan’s largest body of water used to be located here in the 18th century, called Collect Pond.  The pond earned its name from being a place to “collect” waste.  Pond was drained in 19th century and canal was built to drain dirty water to sea and the canal was later paved and became Canal Street
- Five Points – originally a slum that accommodated immigrants from Germans and Irish in 19th century, street gangs like Plug Uglies originated here.
- Statue of Sun Yan-Sen: (12 November 1866 – 12 March 1925) was a Chinese doctor, revolutionary and political leader. As the foremost pioneer of Nationalist China, Sun is frequently referred to as the "Father of the Nation" (國父), a view agreed upon by both the People's Republic of China and the Republic of China. Sun played an instrumental role in the overthrow of the Qing dynasty during the Xinhai Revolution. Sun was the first provisional president when the Republic of China was founded in 1912 and later co-founded the Kuomintang (KMT) where he served as its first leader.  Click here, for more information. 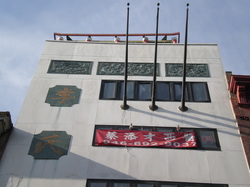 7. Doyer Street:
- Street curves around so that straight-flying ghosts can’t haunt it
- Location of first dim sum restaurant, local post office
- Mott, Pell, Doyers and Chatham are the heart of old NY Chinatown
- In 1900s, used to be called “The Bloody Angle” because of the sharp curve in the street and for being a popular fighting spot for Tong Gangs in Chinatown
- Nom Wah Tea Parlor (13-15 Doyer Street): Opened in 1920; one of the oldest restaurant in Chinatown, the recently revamped Nom Wah — which had offered a limited menu featuring such traditional items as lo mein and taro root dumplings — is now praised for its oversized pork buns and scallion; renovated and reopened in February 2011


8. Tasty Hand-Pulled Noodles (1 Doyer Street): Our last stop was for a group lunch for some tasty noodles. 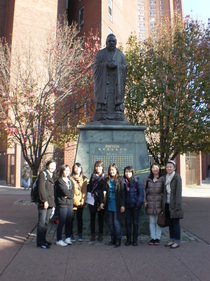 Mentors and mentees in front of Confucius Plaza

Thank you Maggie for leading the walking tour!