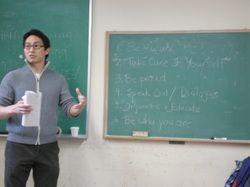 Dan discussing ways to respond to racism
This week, we had guest speaker, Dan Huang, come in to do a workshop.  The goal of his workshop was: "To give students confidence on how to deal with racism and/or inter-ethnic tension" through:
1. Validation of their experience with (or without) racism and discrimination
2. Explanation/Understanding of their experiences
3. Presentation and discussion of responses to racism and discrimination


First, Dan introduced himself, gave some ground rules such as confidentiality and respecting others and their experiences.  And, each person went around and introduced themselves and said if they ever experienced discrimination themselves or toward others, what kind and the impact it had on them. 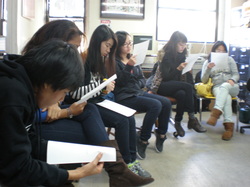 Looking over definition sheet
Then, Dan listed important words on the board: Discrimination, bias, hate crime, micro-aggression and structural discrimination.  He asked the group if they knew what each word meant then gave textbook definitions of each word.  Afterwards, he discussed where discrimination came from and gave a brief history timeline about it and how it is relevant today.  Last, Dan had the students give some examples of problems they see with discrimination, whether in their schools or lives, which were: 1. Bullying, 2. Teasing, 3. Stereotypes or generalization, 4. suicide/mental health, 5. Ignoring/exclusion, 6. Cycles of Misunderstanding, 7. Unfair treatment from teachers or school staff members.  Then each student was given a chalk to put three marks on the examples they felt was most important to them.  The top two were: Cycles of Misunderstanding and Bullying.

The next activity was creating an action plan.  First, Dan made a list on the broad of ways to deal with racism.  They were: 1. Be Aware, 2. Take Care of Yourself, 3. Be Proud, 4. Speak Out/Dialogue, 5. Organize and Educate, and 6. Be Who You Are.  Two groups were created, one (Amy, Bernice, Ming, Rena, Zhoufeng) created a skit and action plan on Bullying and the other (Ann, Jasmine, Lauren, Maggie, Suzanne, Yishion) created an action plan on Cycles of Misunderstanding.  Some ideas from the action plans were: Speak up, understand others and don't generalize; understand where others are coming from, and educate others.

Last, Dan showed a video called "Standing Up To Bullying."
Thank you Dan Huang, for taking the time to visit Shared Stories and lead this positive and inspiring workshop.  Everyone enjoyed it and there are many helpful ideas to take away from it in handling and dealing with racism and discrimination. 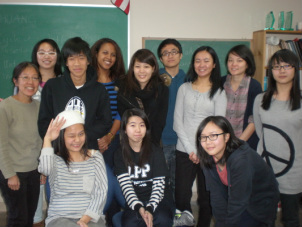 Finally, we had to graduate our students and handed them their certification of completion.
Congratulations to the Fall 2011 Shared Stories graduates!