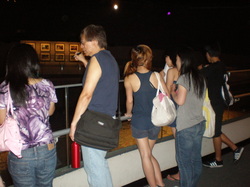 On July 24th, 2011, we took a field trip to the Queens Museum of Art to see Corky Lee's exhibit: "Asian Pacifically New York - The Photography of Corky Lee."  Corky Lee was also present to give us a tour of his exhibit and talked about the panorama of New York City inside the museum.

First, Corky Lee used a laser pointer to show us landmarks and the different types of neighborhoods throughout NYC.  He asked where each of the students lived in and showed us where the locations were on the panorama.  Some of the neighborhoods were: Manhattan Chinatown, Flushing, Elmhurst and Brooklyn.  He also talked about the history of some of the areas and the ethnic groups located in them.  Then, we looked at Corky Lee's photographs and he talked about the background information such as the history, what was happening in the pictures, and his feelings about the picture and the event.

Thank you, Corky Lee, for taking the time to give us a tour of your exhibit and for your exceptional knowledge of the city of New York.

Here's more information about the exhibit:
"By capturing the geographically, culturally and linguistically disparate communities under a pan ethnic-framework, Corky Lee highlights the political solidarity and shared identity forged in the American and New York contexts.  These contemporary images challenge centuries-old ideologies and representations, and thus becomes instrumental in reconstructing and redefining a population that will continue to flower as engaged citizens, some images hone in on issues of immigration and post-9/11 experiences. Lee also includes an image of the detained Chinese artist, Ai Wei Wei from 1989 during pro-democracy protests."
***The exhibit ends Sunday, August 14th, 2011. 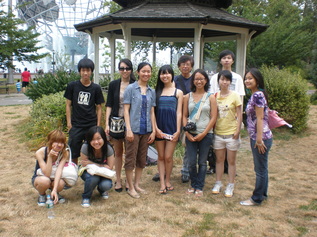 Students and mentors with Corky Lee outside of the Queens Museum of Art.
ASSIGNMENT: Based on what you learned from Corky Lee's exhibit and his discussion on the panorama and your own knowledge, answer this question: What makes a community a community?  Write at least 5-6 sentences answering this question and be creative with your answers.  Use some of the information you learned from Corky Lee as reference to your thoughtful ideas.