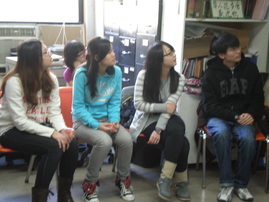 As follow-up to our excellent first session, this week we focused on continuing to build rapport among the group, revealing commonalities between members, and establishing a foundation of knowledge for discussing the upcoming semester topics. We learned fun new facts about each other and started to ask key questions about current issues, which will be revisited in later sessions.

Here's what we did:

The Big Wind Blows: In a circle, “IT” in the middle says “The big wind blows for…” something true for them, such as “wearing the color red”. Any participants for which that is also true must get up and find a new seat in the circle. The person left without a seat is the new “IT”. Participants should aim to name things you can’t “see” on the outside, like siblings, hobbies, etc. in order to get to know one another better. *SAFETY* should be considered since this involves physical activity.

Pool Noodle: In a circle, “IT” uses half of a pool noodle (or similar object) to tag people in the circle when their name is called before they can send it to someone else in the circle. Anyone can start the game. E.g. Andrew says “Andrew to Jennifer” and Jennifer has to say “Jennifer to Peter” before Andrew tags her, and so on. Tagged people become “IT”. You are automatically “IT” if you call the name of the “IT” person in the middle. *Challenge: Replace people’s names with animals, countries, etc. and be careful not to call out things not in the circle. *SAFETY* should be considered since this involves physical activity. 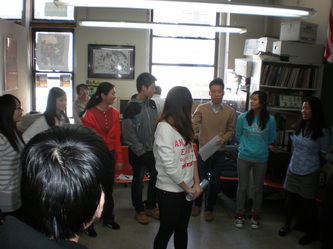 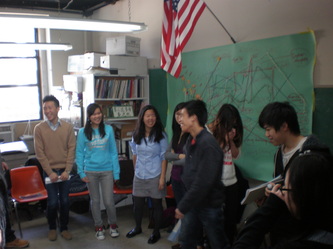 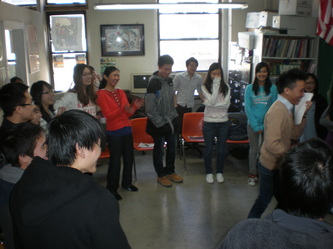 Assume that people within our group and outside of our group are doing the best they can.

Actively combat myths and stereotypes about our own groups and other groups so that we can break down the walls that prohibit group cooperation and group gain.

“Dialogue means we sit and talk with each other, especially those with whom we may think we have the greatest differences. However, talking together all too often means debating, discussing with a view to convincing the other, arguing for our point of view, examining pro’s and con’s. In dialogue, the intention is not to advocate but to inquire; not to argue but to explore; not to convince but to discover.” (Louise Diamond, Ph.D., The Institute for Multi-Track Diplomacy, http://www.imtd.org/) Dialogue is often defined as a conversation between two or more people or an exchange of ideas or opinions. It is characterized by participants exchanging information face-to-face, sharing personal stories and experiences, honestly expressing perspectives, clarifying viewpoints, and developing solutions. The goal of dialogue is to deepen understanding and judgment, and to think about ways to make a difference on an issue. This is more likely to occur in a safe, focused discussion when people exchange views freely and consider a variety of views. (From dialoguecircles.com)

Our identities within the context of the different social groups that we belong to such as ethnicity, race, sexual orientation, gender, class, occupation, disability status, religion, and nationality. (Arizona State University Intergroup Relations Center, www.asu.edu/provost/intergroup/)

A collective term for men and women of Asian, African, Latin and Native American backgrounds; as opposed to the collective “White” for those of European ancestry. (Arizona State University Intergroup Relations Center, www.asu.edu/provost/intergroup/)

The belief in treating everyone “equally” by treating everyone the same; based in the presumption that differences are by definition bad or problematic, and therefore best ignored (i.e., “I don’t see race, gender, etc.”). (Arizona State University Intergroup Relations Center, www.asu.edu/provost/intergroup/)

The tendency for groups to “favor” themselves by rewarding group members economically, socially, psychologically, and emotionally in order to uplift one group over another. (Arizona State University Intergroup Relations Center, www.asu.edu/provost/intergroup/)

Peggy McIntosh, author of “White Privilege: Unpacking the Invisible Knapsack,” defines white privilege as “unearned assets” about which most white people are unaware.

The conscious or unconscious processes by which the voice or participation of particular social identities is excluded or inhibited. (Arizona State University Intergroup Relations Center, www.asu.edu/provost/intergroup/)

People and groups who will or may be affected by the outcome of a dialogue or public participation process, or who would affect the outcome themselves.

Social Justice is a social goal: a society in which justice is achieved in every sphere, including economic, political, and cultural. Those who pursue social justice seek a fair distribution of social goods, such as equal access to opportunity, equal standing before the law, equal voice in determining society’s direction, and equal standing in social and cultural institutions, regardless of cultural heritage, race, gender, disability, education, or class. The term is used in The Curriculum Project to describe the commitments to pluralism, participation, and equity that motivate much community cultural development work. (From Imagining America’s Curriculum Project Glossary)

*Definitions excerpted from the National Coalition for Dialogue & Deliberation’s Quick Reference Glossary. http://ncdd.org/rc/glossary
Homework: Come up with a list of interview questions to ask a family member.  Then, create and write a short story based on what you uncovered from the interview.  Send questions and short story to: bnny5112@gmail.com.  Be prepared to discuss in the next session.