Christina Baal, Director of Civic Engagement and Field Operations at the New York Immigration Coalition, visited us this week for a presentation on immigrant rights and advocacy. She brought with her NYIC intern Emily, and a friend/DREAMer Chuck.

What did we learn?
FAQ
Q: How do federal laws get passed?
A: All laws start out as bills, which are essentially ideas. Only a senator or representative can introduce a bill 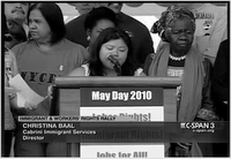 Christina Baal, LMSW, received her BFA in Drama from New York University and her MSW from Hunter College School of Social Work with a specialization in Clinical Practice and Community Organizing.

As former Director of Cabrini Immigrant Services, Christina expanded the CIS Justice for Immigrants Campaign, a community organizing group that has engaged both documented and undocumented community leaders in the federal fight for immigration reform through leadership trainings, legislative visits, lobby days, and mobilizations. In 2007, Christina was named One of the 100 Most Influential Filipinas in the US by the Filipina Women's Network because of her advocacy work for immigrant youth and families. Today, she is Director of Civic Engagement and Field Operations at the New York Immigration Coaltion.