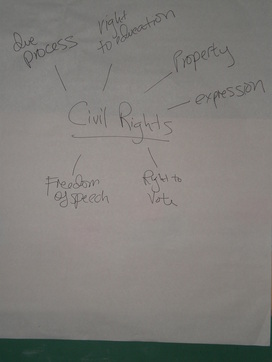 This week we defined civil rights and discussed the historical events surrounding the Japanese Internment during World War II. Why did Americans allow their politicians to pass a law that so blatantly violated the civil rights?  And how are these events similar to the attitudes Americans had towards Muslims after 9/11?
Treatment of Japanese Americans was directly related to the state of US-Asian relations at the time. The US feared Asia, feared what they could do, and did not see Asians in America as true citizens. After the Japanese bombing of Pearl Harbor, many Americans believed that any Japanese person, whether they be citizens or not, would always be “Japanese nationals” at heart. They were just not 'American'. These laws, like the ones forcing the internment of Japanese Americans, REINFORCED this racism. These perceptions have shaped the course of events in the Asian American experience.

1.    Relocation: to change one’s place of residence, or move to a different location (permanently).
2.    Internment: the state of being restricted or confined to a given set of limits, as a prisoner of war, enemy aliens, or combat troops.
3.    Civil Rights: Civil rights include the insuring of people's physical safety, protection from discrimination on grounds such as gender, race, religion, national origin, age, as well as individual rights such as freedom of thought, speech, expression, the press, and movement.